Hi @jeff.dietiker @onlyjus @cgw ,
I have used 21.1.4 version of the code to model FBs using TFM method. It happened to me that the time-averaged fields do not show symmetrical behavior on the walls. However, as the BCs and geometry is symmetrical, we expect symmetrical behavior of the averaged properties. The FB that I modelled is a psudo-2d Bed studied experimentally by Laverman et al. [2008].
So, I switched to 2013-1 version of the code used by a former member of our group. He has implemented some changes in that version and got really good results. I have attached the results of the time-averaged particle velocity field in a horizontal section of the bed. I wonder if anyone has the same problem implementing JJ BC on the walls? I can provide the modification to the old version in case it is needed. please see the attached results obtained by the 2013-1 and 21.1.4 versions implementing exactly the same settings. As you can see the 21.1.4 version get extra vertical structures in the top portion of the bed also.

I belive something is wrong with the new versions. I apologize in advance for sharing the images like this. 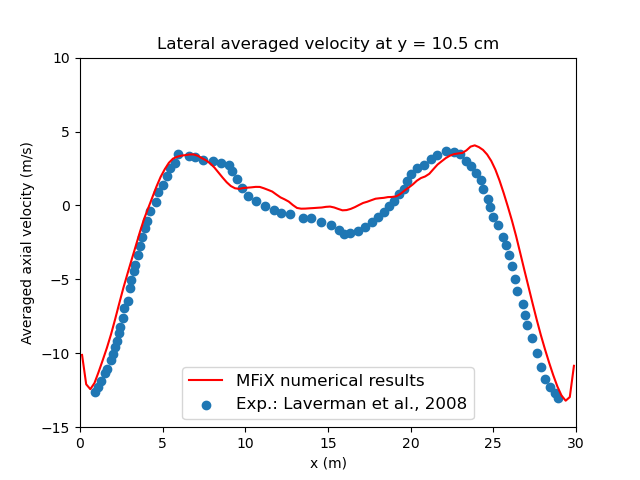 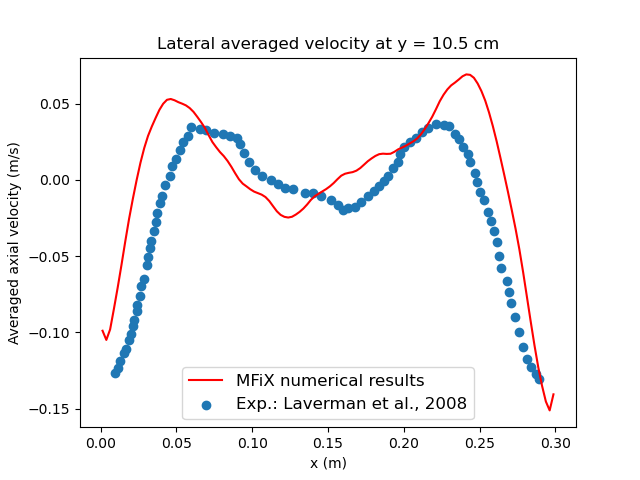 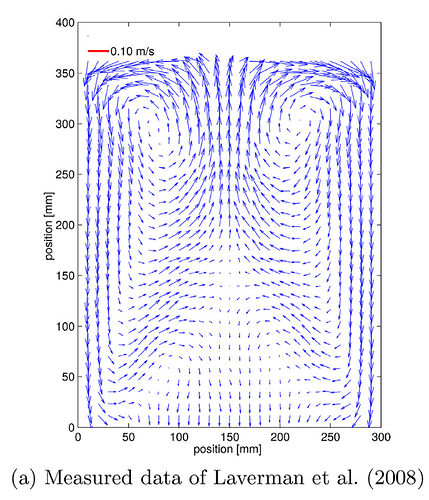 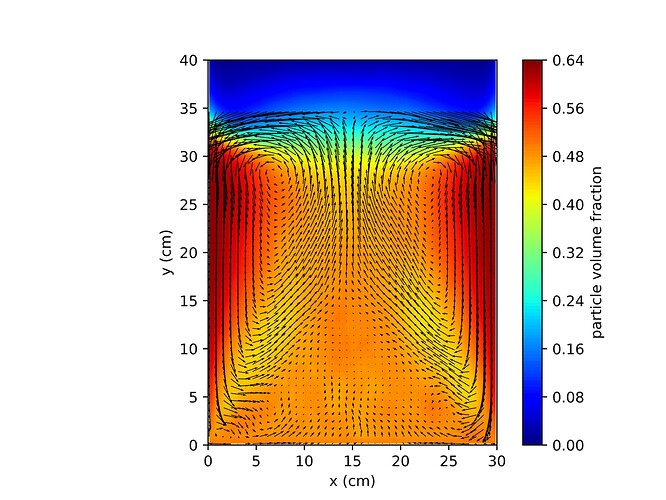 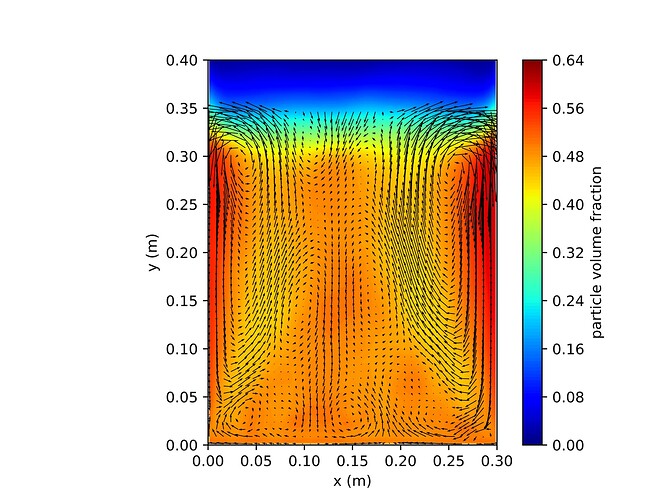 Are the cases exactly the same? Did you run and average over the same time period? What about the 2013 version stock (without mods) vs with mods? Can you post the case files? …

FYI, we run a regression test suite every night, checking to make sure changes to the code don’t introduce differences.

I mentioned that some modifications have been applied to version 2013 of the code. However, If you just consider version 2021, you will see that the values of the particle velocity on the walls are not almost the same, while they need to be. I am trying to modify the 2021 version according to the changes he applied but MFiX has been evolved and it makes it difficult to do that. I will attach the case he ran using the 2013 version and my case in 2104. Just consider he has used D_Pc=3d0 instead of D_Pc=5d0 in the Princeton model and some numerical modifications in the code. I have double-checked everything and all the settings are the same in the case files.
BTW, I ran the same case using 2013 and 2016 versions of the code without any modifications and the results was like the 2021 version. If you are interested I can send you the files that have been modified. As you can see these modifications made the results really better.

I also have played with the time average period and it did not improve the results at all even by averaging on really long time periods.
I have no idea about the 2013 version stock vs mods.

I checked your attached cases. Are the default constitutive equations employed in case 2013 the same as those in case 2021? such as friction model and kt_type, etc.

Thanks @wuming,
The results were so different that intrigued me to check the files several times. And I am pretty sure the case files are the same. Putting this comparison aside, the MFiX results are not symmetrical, I have run some simulations for 300 seconds and yet the results were not good on walls.
What do you think would be the next step to reconcile the results?

@moshenclick - if you are expecting identical outputs, you need be sure that the inputs are the same.

These two files are hard to comare - the 2013 case is in CGS, it predates the GUI and is not written in the current format. In order to make it easier to compare the two cases, I loaded them both in the current (21.4) version and re-saved them. This converts the CGS file to SI and normalizes the output format.

After loading/saving the files, I did this:

This produces a side-by-side listing of the differences, ignoring whitespace-only changes (-W). The output is attached. Lines marked with a ‘|’ are different in the two files, lines marked with ‘<’ or ‘>’ are present only in the left or right files. 2013 is on the left, 2021 on the right.

As you can see there are several significant differences, for example ro_s0 (constant solids density) changed from 1000 to 2500. There are multiple other changes, as well as keywords which are no longer supported (Undocumented keys at the end, such as savage).

WIth these differences, I would not expect identical outputs.

@cgw
You are completely correct regarding the distinctions between keywords and units. However, I personally compared them line by line multiple times. At least in terms of solid density, the 2013 version is 2.5 in cgs unit and 2500 in Si unit introduced in 2021, which are equivalent. Am I correct? I’m not sure why the output is 1000. I reviewed the input data for both files line by line and found that it was the same.
Also, as I previously stated, even if we exclude the 2013 version results, what do you think about the differing velocities on the wall?

I tried to normalize the file formats and convert both to SI precisely because I do not trust a manual line-by-line examination, especially when the file formats are so different. This is why I suggest using diff or sdiff, after normalizing the formats.

On closer examination, the key ro_s0 is not present in the original (cgs) file. When I loaded it into MFIX the default value of 1000 was applied. So that accounts for the difference in that key, at least. But there are other differences as well - leq_sweep changed from “ISIS” to “RSRS”, for instance. Maybe these differences are not significant, but that remains to be shown. I don’t have any further idea about the differeng gas velocity, sorry.

Another interesting and potentially significant difference is the keyword SAVAGE which was present in 2013 but deprecated as of 2016.

@cgw I tried to check everything. For example the preconditioner choice did not affect the results or savage=2 in older versionis the same as the default value in 2021 version. I just want to let you know that we can get really better results using the code by some modifications. I will try my best to implement those modifications in the new version to make everything easier. However, some subroutines have evolved completely.

If you are able to port the proposed changes to the current MFiX codebase, we’d be interested to have a look.

Can you post the title of the research paper of Laverman et al. you mentioned?

Hello,
It is the paper that I used for this simulation:
" A comprehensive assessment of different wall boundary conditions on the simulation of bubbling fluidized beds" by Haghgoo M. R. et al.

The formulation used in this paper is also mentioned in the previous paper of the author titled:
“Effect of particle stress tensor in simulations of dense gas–particle flows in fluidized beds”

And this is the original paper for the experimental data:
“Investigation Into the Hydrodynamics of Gas–Solid Fluidized Beds Using Particle Image Velocimetry Coupled With Digital Image Analysis”

From the paper titles you provided, i find that we may have the same research topic. I am recently studying bubble properties based on TFM simulation. But, the validation of simulation is not what i really care about now, though i think it is really important. I am still confused about how to calculate bubble velocity, or rise velocity. I asked the relevant questions to Weber, but there is still no answer. Do you have any ideas about this problem?

Hi, Weber When we calculate bubble velocity between two frames, the main difficulty is that bubble velocity is uncertain and the shape of bubble can be deformed. It means that it may be hard to track bubbles between two subsequent frames , especially when there is a group of bubbles in the bubbling bed, in which the split and coalescence of bubbles make this problem more tough. That is, the displacement of bubble is difficult to be determined. Due to the uncertain velocity of bubble, the fps of…