Code Structure of CFD-DEM in MFiX

The numerical method of solving the gas-solids coupled equations is divided into two parts.
The first part the is gas-phase solver, see [Fig. 1]. For each time step, the particles are mapped to CFD cells based on their positions. Then, the gas volume fractions, convective heat transfer coefficients, and drag coefficients are calculated using interpolated particle positions, temperatures, and velocities. After the pre-calculation of these coefficients, the CFD solver enters the iteration process to solve the gas velocities, pressures, densities, temperatures, and species. The SIMPLE algorithm is used to solve pressures and velocities. The temperature and species equations are then solved with velocities calculated in this iteration. At last, the convergence is checked. After several iterations, these equations will converge, then the chemical reactions are solved. For heterogeneous reactions, the mass and heat transferred from solid phase is used to explicitly update gas phase density, temperature, pressure, and species mass fractions. For homogeneous reactions, the ODEPACK is used to solve the chemical reactions where much smaller internal time steps are used. 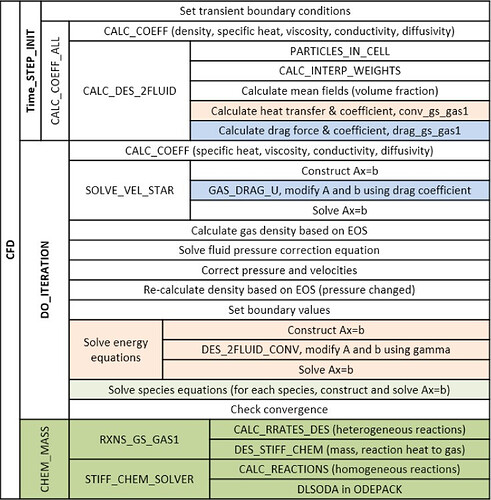 The second part is the DEM solver, see [Fig. 2]. Firstly, the drag force, pressure gradient force, and convective heat transfer are calculated using gas-phase variables updated in the CFD part. The particle mass, density, and mass fraction of each species are then updated using the reaction rates. After these calculations, the DEM solver enters an internal loop to march the solid phase simulation time to gas-phase simulation time. It will calculate particle-particle/wall collisions, particle-particle/wall conductive heat transfer. Then the collision forces are summarized with drag forces and pressure gradient forces to update particle velocities and positions. The heat sources from convection, conduction, and chemical reactions are summarized and used to update particle temperature.