Tracker is a cross platform application for tracking particles in videos. The application is written in Python and uses Opencv, scipy, and numpy to process videos and images, find the same object (particle) across frames and determine the particle velocity. 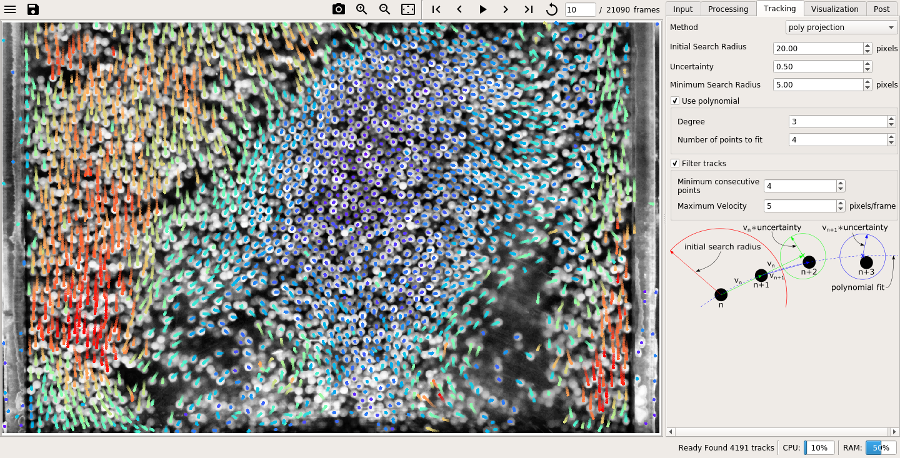 The following dependencies need to be satisfied:

These dependencies can be easily meet by downloading and installing Anaconda. Once Anaconda is installed, install the required modules by opening a console on linux and mac or the Anaconda prompt on windows and executing the following command:

There are a number of command line options that can be passed to the application. For a list of all the options, pass a -h when starting:

Multiple *.trak files can be processed at the same time by using wild cards when specifing the *.trak file. For example, process all the included examples with:

Most of the files in this repository support the GUI with app.py being the main entry point. Both the GUI and command line interface (no_app.py) are started there. The basic image processing pipeline is achieved over three main files:

Synthetic data is created with the routines in synthetic_images.py and supporting functions in particle_generators.py.

Some common support functions are contained in the following files:

The rest of the files support the GUI:

The *.ui files stored under uifiles/ are xml files created with Qt's designer. This is where the majority of the widgets are defined and placed in the GUI.

There are a collection of unit tests located under the tests directory. These tests are run using the pytest library which can be installed using conda:

These tests can be run by executing the following command in a console on linux and mac or the Anaconda prompt on windows in the top level directory:

A coverage report can be generated with the following command