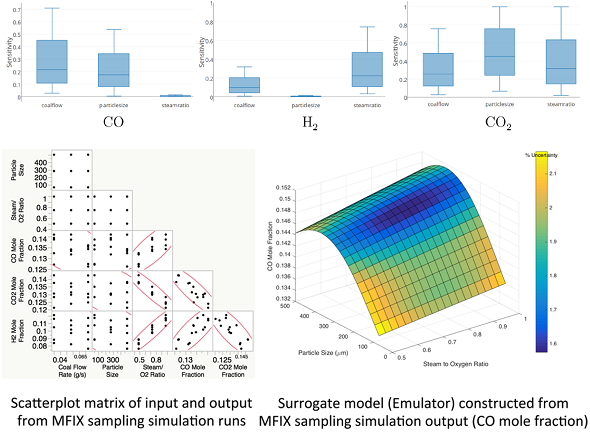 A series of journal articles were recently published to document first of its kind Uncertainty Quantification (UQ) efforts for reacting multiphase gas-solid flows. These include the application of non-intrusive Bayesian UQ methodology to experimental data in a gasifier and the application of the UQ methodology to the corresponding MFiX simulations. This work is a joint effort between NETL and General Electric Global Research Center (GE GRC) performed under a cooperative research and development agreement (CRADA) No. AGMT-0407, with collaboration from Alpemi Consulting LLC and West Virginia University Research Corporation.

The abstracts and links to the articles are given below:

Abstract:
Adequate assessment of the uncertainties is becoming an integral part of the engineering design. This study is based on several efforts that are underway to investigate the uncertainty quantification (UQ) methods that are applicable to multiphase flows. Although particular emphasis has been given on identifying, characterizing and managing uncertainties in computational fluid dynamics (CFD) simulations, experimental data used in the validation of the CFD model is as critical. Hence, the goal of this paper is to demonstrate application of non-intrusive Bayesian uncertainty quantification methodology in multiphase (gas-solid) flows with experimental data as part of our research efforts to determine the most suited approach for UQ. For this purpose, a bench scale fluidized bed gasifier experiment from a prior study is used to demonstrate the applicability of Bayesian techniques on sparse data. Global sensitivity analysis performed as part of the UQ study shows that among the three operating factors, steam to oxygen ratio has the most influence on syngas composition in the gasifier. An analysis for forward propagation of uncertainties shows that an increase in steam to oxygen ratio leads to an increase in H2 mole fraction and a decrease in CO mole fraction. These findings are in agreement with the reference experimental study. Another contribution in addition to the UQ analysis is the optimization-based approach employed to identify next best set of additional experimental samples. Hence, the surrogate models constructed as part of the UQ analysis is employed to improve the information gain and make incremental recommendation, should the possibility to add more experiments arise. The insight gained from this study has been extensively used in the follow-up UQ study with the CFD modeling of the same gasifier configuration.

Abstract:
Uncertainty quantification (UQ) analysis is increasingly becoming one of the major requirements of simulation based engineering to assess the confidence in the results and make better-informed decisions based on the insight derived from the simulations. In an earlier study, Bayesian UQ analysis was applied to existing bench-scale fluidized-bed gasifier experiment results. In the current study, a series of simulations were carried over with the open-source computational fluid dynamics software MFiX to reproduce the experimental conditions, where three operating factors, i.e., coal flow rate, coal particle diameter, and steam-to-oxygen ratio, were systematically varied to understand their effect on the syngas composition. Bayesian UQ analysis was this time performed on the numerical results for comparison purposes. This is part of ongoing research efforts to explore the applicability of advanced UQ methods and processes such as Bayesian methods for large-scale complex multiphase flow simulations. As part of Bayesian UQ analysis, a global sensitivity analysis was performed based on the simulation results, which shows that the predicted syngas composition is strongly affected not only by the steam-to-oxygen ratio (which was observed in experiments as well) but also by variation in the coal flow rate and particle diameter (which was not observed in experiments). The carbon monoxide mole fraction is underpredicted at lower steam-to-oxygen ratios and overpredicted at higher steam-to oxygen ratios. The opposite trend is observed for the carbon dioxide mole fraction. These discrepancies are attributed to either excessive segregation of the phases that leads to the fuel-rich or -lean regions or alternatively the selection of reaction models, where different reaction models and kinetics can lead to different syngas compositions throughout the gasifier.

Abstract:
To improve quality of numerical models used in simulations of a fluidized bed gasifier at any scale, the sources of uncertainty in the simulation have to be identified and quantified. There are several sources of uncertainty that can affect any simulation result and scale up process such as uncertainty in the model input values, uncertainty in the reaction models and kinetic rates, uncertainty in selection of the appropriate numerical models affecting the hydrodynamics, uncertainty in selection of adequate computational grid resolution (uncertainty due to discretization error), uncertainty in the selection of proper numerical techniques required for solution of the discretized conservation equations, and many more. The current study aims to investigate the effect that reaction models for gasification, char oxidation, carbon monoxide oxidation, and water gas shift will have on the syngas composition at different grid resolution, along with bed temperature, which affects the reactions. The global sensitivity analysis conducted showed that among various reaction models employed for water gas shift, gasification, char oxidation, the choice of reaction model for water gas shift has the greatest influence on syngas composition, with gasification reaction model being second. Syngas composition also shows a small sensitivity to temperature of the bed. The hydrodynamic behavior of the bed did not change beyond grid spacing of 18 times the particle diameter. However, the syngas concentration continued to be affected by the grid resolution as low as 9 times the particle diameter. This is due to a better resolution of the phasic interface between the gas and solid that leads to stronger heterogeneous reactions.