Nodeworks is a flexible graphical programming library enabling users to visually construct scientific workflows. The application allows users to connect nodes together that operate on data passed through the connections, forming a directed acyclic graph (DAG). The DAG is executed in parallel, ensuring that all dependent nodes are completed before executing the next node.

Additionally, Nodeworks allows GUI developers to interface with other standalone GUIs such as MFIX (see MFIX Nodeworks plugin guide). We encourage those interested in graphical programming to visit the developer’s section of the Nodeworks documentation to learn more about Nodeworks and its capabilities.

The machine learning toolkit currently consists of a single Neural Net Regressor node that mimics the Response Surface node but uses PyTorch to build and train neural networks with an intuitive user interface. Users can simply drag and drop pre-defined layers and activation functions to build the network. Training, analysis, and visualization of the response surface can also be performed.

MFiX and Nodeworks can be used to optimize devices such as cyclones. This includes geometry. By setting up a simulation with parameters in MFiX, Nodeworks can reach back into MFiX and change the geometry, boundary conditions, particle properties, etc. The design of experiments node can then be used to create samples, write the required directories and files, as well as submit the simulations to a queuing system on a supercomputer like Joule. Once the simulations have been completed, a quantity of interest (QOI) can be calculated from the output. A response surface can be constructed to represent the results. This response surface can then be used by the optimization node to find the optimal design.

A joint simulation and experimental team set out to test the capabilities of the Nodeworks surrogate modeling and analysis toolset with a pair of cold flow demonstration problems. Both processes involve separation of a dispersed 1:1 mixture of heavy aluminum and light nylon beads. The first validation exercise considered a purely batch separation process in which the particles were initially well mixed in a simple square bed with uniform fluidization. The second validation exercise considered a quasi-continuous device which contained an additional gas source in the L-valve. With both exercises, the simulation results are in qualitative agreement with the experiments and the identified optimal operating condition identified via simulation performed quite well in the real world. However, measurements derived from high-speed video imaging of the quasi-continuous device showed quantitative disagreement between simulation and experiment, especially far from the optimum. These findings underscore the importance of proper modeling in CFD based optimization. After all, a surrogate model and the results derived from it are only as good as the underlying data supporting it. 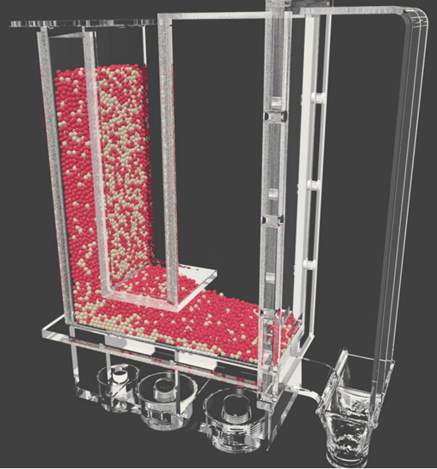